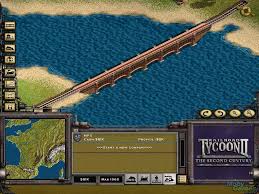 Railroad Tycoon 2 is a favourite of Gamecock Media and focuses on trains and railroads as the main theme. The game was made available to a series of giant video game consoles, which includes PlayStation by Sony Computer Entertainment and Dreamcast, and some personal computers or operating system including Macintosh and Linux.

Equipped with a diametric view, in comparison with the top-down view of its older version, this is a much better version of Railroad Tycoon boosted with excellent graphics and more exciting gameplay.

The game, being a railroad simulation, mainly revolves around constructing tracks, stations, and trains, on a certain map chosen by the player itself, who takes the position of a chairman of a certain railroad corporation. In the Railroad Tycoon 2, the player is challenged to generate proceeds despite the fact that factors like the rivalry with other companies, train robbery, economic downfall, and train units going kaput exist.

The player is also taken to a real-world experience as the game itself includes various upgrades, a range of trains that vary in performance; industries including fabric mills and bakeries; and factories, namely, canneries, steel mills, and automobile plants, to mention a few, and involves the player to make real-life decisions, that is, purchasing goods, balancing cost of operation with the profit, and solving common problems regarding the business itself. This is a popular theme which has been adopted to casino tycoon, complete with casino video slots, and theme park tycoon where rides are simply extraordinary.

Railroad Tycoon 2 is composed of eighteen missions that take place in different places of the world including North America and Europe. Players also have the option to choose what difficulty level they seem appropriate for them as the game presents itself in three different difficulty levels each having three specific objectives. With each objective completed, the player is rewarded a corresponding medal. Only completing the first objective, the player is awarded a bronze medal; for the two objectives, a silver medal; and for all the objectives, a gold medal. In addition to the aforementioned, the player also has the choice to play any mission they like for as long as they like. Albeit a failed mission, a continue button is always provided for the player to keep playing.